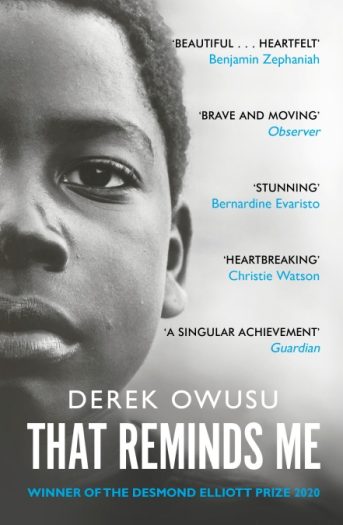 This is the story of K.
K is sent into care before a year marks his birth. He grows up in fields and woods, and he is happy, he thinks. When K is eleven, the city reclaims him. He returns to an unknown mother and a part-time father, trading the fields for flats and a community that is alien to him. Slowly, he finds friends. Eventually, he finds love. He learns how to navigate the city. But as he grows, he begins to realise that he needs more than the city can provide. He is a man made of pieces. Pieces that are slowly breaking apart
That Reminds Me is the story of one young man, from birth to adulthood, told in fragments of memory. It explores questions of identity, belonging, addiction, sexuality, violence, family and religion. It is a deeply moving and completely original work of literature from one of the brightest British writers of today.

Derek Owusu is a writer, poet and podcaster from north London. He discovered his passion for literature at the age of twenty-three while studying exercise science at university. Unable to afford a change of degree, Derek began reading voraciously and sneaking into English Literature lectures at the University of Manchester. Derek edited and contributed to Safe: On Black British Men Reclaiming Space. That Reminds Me, his first solo work, won the Desmond Elliott Prize 2020.